(Dr. H’s real name has been changed to protect his identity. Any resemblance to a “Dr. K.” is unintentional and purely coincidental.) 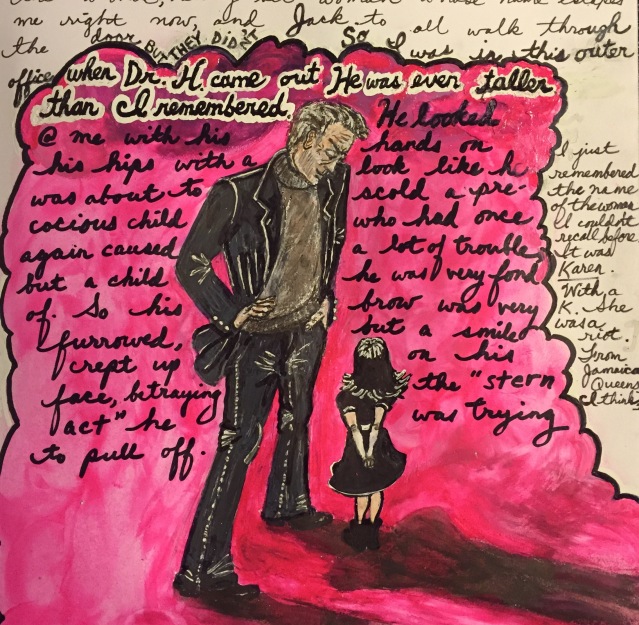 Dr. H. was an important figure in my life for many years– so much so that to say he “was” important seems inaccurate. Our time together (most of the early aughts) may have ended long ago, but his contributions are STILL paying me valuable dividends on a daily basis.

(Note: That’s the first time I’ve ever typed, or written down in any form, the word “aughts.” Feels pretty great. Must do so more often.)

Dr. H. was (as the “Dr.” part would indicate) a medical doctor. He was also the facilitator of a therapy group I participated in for a few years. It was his job (once a week) to wrangle the five lost souls placed in his charge, kinda like a single dad trying to drive 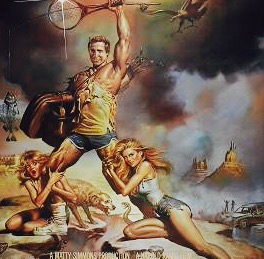 his five kids safely cross-country to the Grand Canyon, only to push them all off the edge once they were there staring down into it. And on his walk back to the van, whistling, he’d absentmindedly toss back, “Hey good luck, kids!”

I like to think of group therapists as the Mr. Roarkes of psychiatry. The Ricardo Montalbans of relationship rescue. Or on a particularly BAD day? The Jerry Springers of all-hell’s-breaking-loose-for-50-minutes-once-a-week-ness.

Those weekly sessions really did have a “Fantasy Island” quality to them. Or maybe it was the other way around- maybe “Fantasy Island” had a group therapy quality to it. I was just too young and not yet therapized back then to recognize that subtext running through each episode:

Mr. Roarke would call a bunch of lost 1980s guest-stars onto his mysterious island once a week, and by the end of each episode, something in those guests would be healed, fixed, resolved. This was no Love Boat. This was a place where you worked your shit OUT! If Love Boat was the honeymoon phase, Fantasy Island was the “couples counseling” phase (so necessary in the post-dopamine period of any “new relationship rush.”

But that was TV, not life. It wasn’t even TV (far worse) — it was TV in the 80s. (It’s like we were all watching children’s theater when viewed from today’s “Breaking Bad”-savvy vantage point, am I right?)  And once the 90s came we shifted from the comforting escapism of fantasy TV to the violent voyeurism of reality TV– Donahue, Springer, Povich, Montel Williams, Ricki Lake… (Ironic that it all got labeled “reality TV” when you consider how incredibly staged, “theatrical” and escapist it quickly became.)

It was easy to imagine Dr. H. fitting right in with the Sally Jesse Raphaels and Phil Donahues still relevant back then. For one thing he looked a lot like Phil Donahue. He was handsome– a thick head of salt & pepper hair topping a six foot three-inch frame– and though he didn’t lead our sessions wearing a Mr. Roarke style all-white suit with a black tie, he did rock that “expensive-suit-with-turtleneck-and-cowboy-boots” look in a way few men of his age could pull off. Add to all of that a dash of Warren Beatty eye-twinkle and you’ve got a perfect image of Dr. H.

I have no way of proving this, but he  also seemed to be a faithful husband and a devoted father.

His wife (a beautiful, older woman) worked in the same practice, in a  small office across from his, so I got to observe them quite a bit.  I even had some sessions with her for a brief period when I’d decided I shouldn’t work with her husband anymore. She was a smart cookie who’d suck down a giant sized smoothie in every session I ever had with her.  She had a no-nonsense “Yente” quality to her, which  I liked a lot. And it was easy to see that where she and her husband were concerned, she ruled pretty-much everything.  They still seemed very much in love with each other after decades of marriage,  and devoted to their teenaged son. And since I was in my late 30s and hopelessly single, that dynamic appealed to me.

Dr. H. still pops up in my dreams every now and then- more so than most people I know. And I think it’s because he’s one of the few people who’s seen “Scary Mary.”  (I can probably count on one hand the number of people who I’ve trusted enough to let them see that side of me. I’m normally so agreeable & diplomatic that I should’ve gone into friggin politics.) Back then, if anything other than my best qualities were revealed to those closest to me it was almost always in the form of “Weepy Mary.” She could be dark, sure, but not threatening to the other person. She hated herself, not YOU!  Poor, sad, “Weepy Mary.” But when “Scary Mary” comes out, she can be, well… scary. And come out she did, thanks (in part) to Dr. H.

“Scary Mary” really let that guy have it. More than once. And he pushed back. It takes a LOT for me to expel my anger outward (onto others) rather than turn it inward (onto myself) in the form of depression, self-hatred, and low self-esteem. It’s just always felt EASIER and more expedient to choose the latter (and more instinctive, frankly).

Mirror, mirror on the wall, I’m afraid our time is up.

But when faced with an adversary who throws a really powerful, accurate punch, I punch back. Because I don’t have time to think about it. And when I do punch back, it feels like such a relief. For this reason I tend to befriend people who have a “tell-it-like-it-is” quality. It gives me a vacation from my busy mind-  a mind always racing to stay one step ahead of others, trying to figure out before THEY do what they are needing, or wanting, or hiding from me. When I’m with someone who has no filter, it’s more relaxing for me. If they’re pissed off at me? They’ll TELL ME!  And that means I don’t have to do all of that work figuring it out.

I yelled and screamed at Dr. H. and he took it. I thrashed about. I’d start to take the easy way out by crying and he’d call bullshit. But he never said he couldn’t work with me anymore, or that I was out of line. He took it, and gave it right back if need be. He was INVESTED.

Maybe that explains the dividends.

← Are You A Good Widget? Or a Bad Widget?
Of Missing BeeGees, Lost Gibbs, & Jiminy Glick →