It’s GOTTA suck to be the laughing stock of the country after what was supposed to have been your crowning moment– the Republican debutante ball– turns into a debutante-debacle.

But then on top of that to have First Lady Michelle Obama come out swinging on the first night of the DNC dance– all classy and beautiful and moving and inspiring? Well that’s just RUDE!

Michelle Obama makes me feel proud; and not just proud of her, but of her “other half,” as well.

(APOLOGETIC FEMINIST SIDEBAR: Yes, of course a woman is her own person, whole and complete, apart from any other “half,” defined by herself  and herself alone, yada yada yada…)

I’m a pretty girl, Mama! (Michelle Obama has become our Lady Diana. She’s SO over-the-top-awesome she makes me allllmost feel bad about raggin’ on her Slovenian stepsister.)

Still… a married woman is also a reflection of the man she married, because the kind of woman a man chooses as his life partner reveals a lot about the man.

So it makes me proud that our president has set the bar so high. He has redefined for the 21st century American male what kind of woman they should consider “attractive.” You don’t need to say goodbye to the concept of the “trophy wife.”  You just need to check
what kind of contest she’s representing.

Michelle Obama gives America some pointers on keepin it classy at the DNC.

Because make no mistake —  Michelle Obama is a trophy wife, all right. But she’s the kind of trophy you’d place on the same shelf as a Nobel Peace Prize more than you would, say, a Miss America crown. When most men are content to reach down to the bottom
of a Cracker Jack box for their matrimonial prize, Barak dug a liiiiiitle bit deeper… and struck gold.

Michelle. She’s our Lady Diana. No doubt about it.

As far as First Ladies go, I’ve never had an opinion one way or the other about ANY of them, save Jackie Kennedy. But she was more than a First Lady. She was in a class by herself, that one. Michelle seems to be following in her footsteps.

Michelle is the first time I’ve admired and respected any First Lady as much as their corresponding Commanders In Chief.

Michelle & Barak combined heals something in a generation made cynical by divorced parents, domestic abuse, addiction, and loveless, upper-middle-class marriages standing for nothing except their credit card limit.  Mama and Daddy are at the helm. We can go to sleep. They’ll protect us. The tippy top of the White House wedding cake is balanced now- yin and yang. Little groom figurine and little bride figurine, holding hands.

Damn I’ll be sad to see these two go. But I’m gonna put a slice in the freezer for safe-keeping.

Now- onto some low-brow Melania-gate videos for your enjoyment.

Rumpus and ruckus and Maurice Sendak…

A friend, in a fundraising email for a summer camp, wrote that the camp’s mission statement contains the line: “To create a youthful ruckus of adventure and spirit where souls are ripened and freedom is discovered.” First of all, that is fantastic, and exactly what all camps should be, rather than the dull monotony of soccer balls and flip turns and missed slap shots that were my lot each summer until I was finally old enough to work. Second of all, I have a general fondness for words that begin with “rump” or “ruck,” e.g. rumpled, rucksack, and my favorite, rumpus, as vividly, roaringly rendered by Maurice Sendak.

Generally, “ruckus” is used to soften the blow of a negative situation, a bar fight, say, or the actions of a small mob of angry youths. Sometimes, it is used as a synonym for “hubbub,” or “fuss,” as in “I don’t see…

I’m attempting 365 Characters In 365 Days, my (so far about 180) hats are off to you, Zurbo! This was so beautiful! Cheers,
Mary Birdsong

The tick of her clock at night was like the sound of an old friend.

She would imagine the barking dogs were really wolves, prowling through the snow.

When the play group lady asked her kids to choose their own treasure hunt, Oscar decided to collect photos of the best cars. Lilah was going to gather pretty leaves.

Cielo mumbled to her; “I’m going to see if I can find the world’s smallest sound.”

At the zoo, Cielo found a TINY bird. (On an elephant’s back). But up close… it was LOUD!

Cielo didn’t bother to think of small sounds around the bully. He was like a foghorn! But his mouth released the smallest gasp when girls passed…

I Can’t Believe It’s Not FLOTUS!

I Can’t Believe It’s Not FLOTUS!

Could the conspiracy theorists be RIGHT? DOES Melania have a body double that travels with Donald Trump in her place? Did she REALLY go to China? Or… was it just I Can’t Believe It’s Not FLOTUS!?

Why is using the slow-mo feature in a video post so damn satisfying? Oh, well…. I dunno. There's the controllllll thing I guess. Right?

With less and less "free time" at our disposal, and an annoying Greek chorus of so-called "productivity experts*" constantly nipping at our heels, no WONDER we thrill at the chance to stop time for 15 seconds or so. We had an…

I DID that shit!

Oh wait… did I schedule that heady feeling of unbridled slow-mo power?

Nope.
No, I did not.
Now I'm gonna have to totally redo my emotional epiphany spreadsheet for the week.
(Continues to scroll thru a hypnotizing carousel of photo filters til age 87…)

*Productivity Experts? (myself included) All we really are is a bunch of airbrushed time management Nazis with app-sticks up our app-asses desperately hoping in secret that someone smarter than us will come along and tell us we ARE doing it all wrong and here's how to fix it.
No one knows.
No.
One.
No one.
PS I haven't slept for over 48 hours and I'm STILL behind. 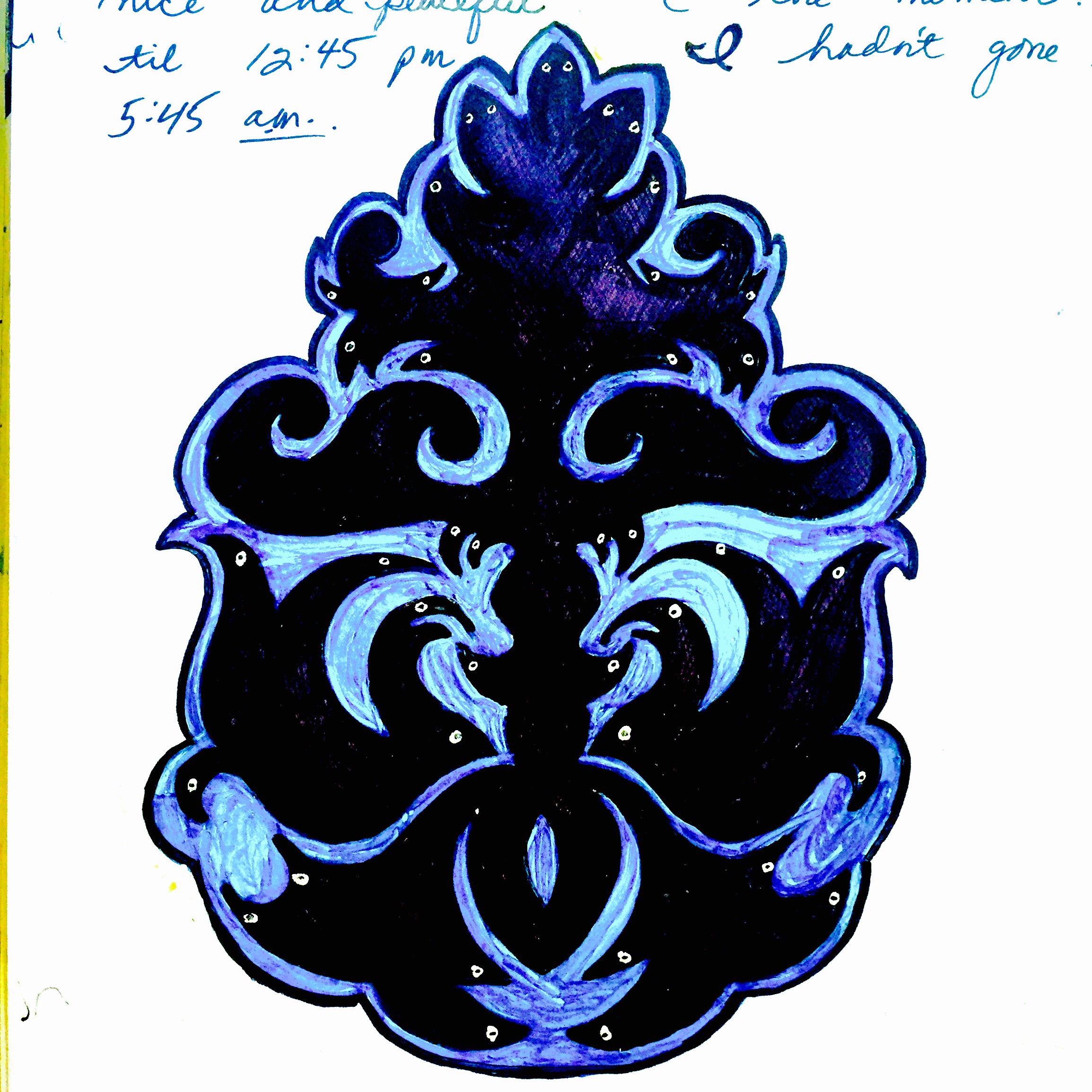 I don’t know what the above drawing means. But that’s my favorite part about drawing. Once I stopped trying to convey some specific  meaning when I draw or paint, I became much more immersed in the work — to the point where “work” is a misnomer.  This kind of immersion feels so complete that it ceases being work and starts to become  “play.”

And a fringe benefit of “letting go”  is (almost always) being happier with the results– results I allowed to happen rather than forcing.

I was just drinking my morning tea and trying to draw a curly-cue pattern I noticed on a pillow in my living room.

It’s highly likely this drawing surfaced because of an HBO documentary I saw the other night – Hitchcock and Truffaut – which featured  several snippets from THE BIRDS.

Maybe I just like creepy birds and curly cues.

A beautiful and simple video attempting to translate the untranslatable language of love: https://vimeo.com/andrewnorton/untranslatable